Chiari malformation (spoken as kee-AHR-ee) is a disorder of the skull where the cranium that holds the brain is small at its base.  The brain is cradled and protected in a casing of bone called the cranium.  The cranium is made up of 6 fused bones- the frontal bone, sphenoid bone, ethmoid bone, parietal bone, temporal bone and occipital bone.   The occipital bone is the most inferior or lowest bone in the cranium and it protects the back of the brain. 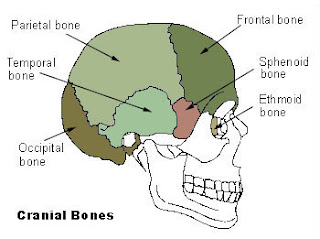 The posterior fossa cradles the most posterior (back) and inferior (lowest) portion of the brain called the cerebellum.  The cerebellum is a smaller domain of the brain that coordinates motor function- such as balance and coordination.  It has many nerve tracts that communicate with the cerebrum where your brain "decides" on how to move and react to its environment.  Also in the cerebellum are tiny channels and chambers that act as canals to move nutrient-rich fluid (called cerebral spinal fluid or CSF) around the brain feeding it and cleansing it of waste.   CSF acts much like the blood supply but unlike blood, it does not carry cells other than those of your immune system; essentially protecting it from viral and bacterial infection.  The CSF travels through the cerebellum in a canal, called the cerebral aquaduct, that moves from the cerebral area down into the brainstem.  The CSF accumulates in a chamber that sits just under the cerebellum, called the 4th ventricle.  From here it drains down another canal into the spinal cord through the central canal.  At the base of the occipital bone is a large opening called the foramen magnum where the brain stem exits the cranium and leads to the spinal cord. 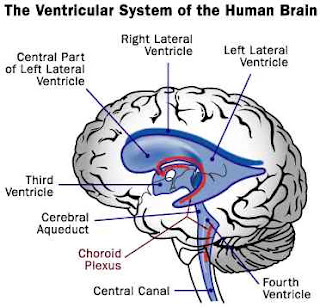 In WS, mis-shapen cranial bones are prevalent making Chiari an unfortunate complication of the disorder for some.  When the cranium is formed during fetal development, some people's posterior fossa is mis-shapen.  This can happen in two ways.  First the base of the skull that fuses with the facial bones, called the clivus, can be shorter than normal consequently crowding the cerebellum.  The second malformation that can occur is in the tentorium cerebelli.  This is a fiberous covering that separates the cerebrum from the cerebellum.  This membrane when situated in a steep fashion pushes down on the cerebellum and crowds the space. 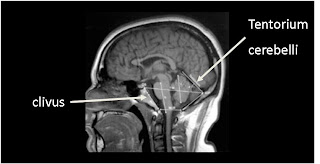 The severity of crowding can cause pressure to be exerted on the cerebellum creating neurological or motor issues.  It can also close off the channels where CSF moves causing it to build up pressure and stop its flow which essentially will cut of supply of CSF to parts of the brain stem and spinal cord.

Types of Chiari
Chiari Malformation can occur in various degrees of severity.  It is considered a congenital disorder (where it is formed at birth) but symptoms are often not witnessed until adolescence or early adulthood because the pressure can cause neurological damage over time.  In Williams Syndrome (WS), type 1 Chiari Malformation occurs in 10% of cases.  Type 1 is less severe and often is not accompanied by any symptoms.  It's found more commonly than the other types and is often diagnosed in conjunction with other neurological disorders rather than on its own.  Type I is often considered an adult form because it is often not usually discovered until later in life. 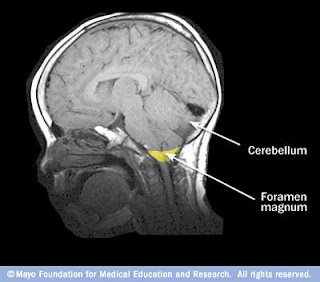 
There are also two other types of Chiari Malformation.  Type II, also called Arnold-Chiari Malformation is typically found in conjunction with a disorder of the spinal cord called spina bifida where the spine doesn't close properly during growth in-utero and the spinal cord protrudes from the back.  This type is usually discovered during pregnancy in an ultrasound because it is accompanied with other spinal abnormalities that are more obvious.  The third type, which is rare and most severe is Type III which leads to long term debilitating neurological issues and requires surgery and long term treatment.

There is not much known if Chiari is a hereditary disorder.  There are a few documented instances where it seems to run in a few families but not much is known about genetic links to this disorder.

Most people with Chiari will experience headaches typically at the base of the head or neck and are often treated for pain.  Many end up with severe headaches after coughing and sneezing.   Other symptoms include changes in the voice and difficulty swallowing often with gagging or choking.  Because the cerebellum controls coordination, body movements can become difficult.  This can include spatial difficulties, dizziness, blurred vision, poor fine motor control (such as holding a pencil and writing), numbness and tingling in the hands and slurred speech.  Other symptoms that are considered more rare are sleep apnea, ringing in the ears, poor bladder control, scoliosis and chest pain.

Unfortunately for those with WS, the symptoms of Chiari malformation are common issues in WS such as coordination issues, gagging and swallowing issues and fine motor delays so it may be difficult to spot them if your child cannot communicate that they have a headache. 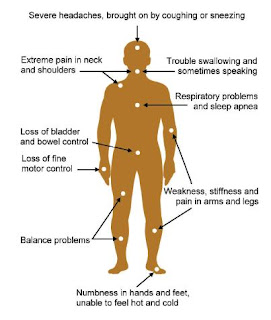 If Chari malformation is suspected a neurologist will often complete an MRI to assess the bone formation.  They will conduct a special test called a cine-MRI which tests the flow of the CSF through the brain to see if there is blockage.

In some people with Chiari, syringomyelia may develop due to nerve tract damage.  In this complication, a canal or cyst will develop in the spinal cord and fills with fluid.  This can cause additional pressure in the canals that carry CSF and can cause further nerve damage. 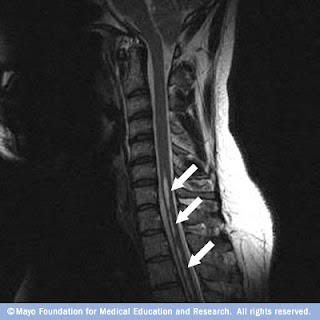 Arrows indicate regions of syringomyelia
Treatment
Surgery is the only treatment that can stop neurological damage to the central nervous system and depending on the severity several surgeries may be needed to effectively repair the cranial crowding.  If there is any doubt about need for surgery it will usually be delayed.  There are three reasons a neurologist would suggest surgery for this disorder: 1. There is obvious neurological damage especially if it worsens over time; 2. If other spinal cord issues are present as well (such as tethered cord, scoliosis, spina bifida, etc); and 3. If the symptoms of Chiari greatly affect the person's ability to cope day to day (such as if the headaches are too great to manage).

The surgery itself is called decompression surgery.  The goal of the surgery is to relieve pressure exerted on the channels that carry CSF so that proper flow is restored and to relieve any pressure exerted on the cerebellum by the skull.  This is accomplished by performing an occipital craniectomy which means they remove some of the skull bone at the base of the skull to increase the space in the occipital posterior fossa.  This may  not require going into the brain itself; it focuses on changing the shape of the bone.  The surgery can also include a C1 laminectomy which is surgical change to the first bone in the vertebrae (cervical vertebrae #1).  In this procedure, they remove an archway that surrounds the spinal cord and possibly the ridge that forms the portion of the spine that you feel when you touch the back.  The goal of this is to relieve pressure where the cranium and vertebrae meet (where the headaches often exist).  In these sections where the bone is removed, the tough brain coverings that sit underneath the bone remain intact. 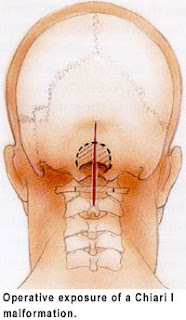 At this point of the surgery some surgeons (5-10%) stop; about 45% also remove dura mater (called a duraplasty) which is the most common type of surgery for this disorder.  Dura mater (meaning "tough mother") is the very tough covering that surrounds the brain and spinal cord.  It has the consistency of thin plastic, like that of a water bottle. 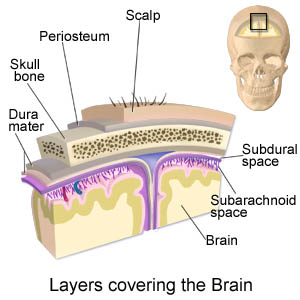 The dura mater would be cut and then a synthetic patch of it would be sewn in to increase the area and free up more space.  This procedure, called a graft, can use tissue from the patient itself, bovine pericardium (a sack lining that surrounds the heart of the cow) or synthetic material.  The material used is really the preference of the surgeon.  There is no research that shows one is better than another.

From here another 45% of doctors will also remove the second layer surrounding the brain called the arachnoid space.  This layer is part of the channel system that skirts CSF around the brain and it often has lesions in it that when broken, can free up room for the cerebellum.  In some cases, the surgeon may also shrink the cerebellar tonsils themselves by either cauderizing them (which makes them shrink) or resecting them (cutting a portion out) to relieve the crowding and open up the channels for CSF flow.  This manipulation of the cerebellum itself is more risky because by interrupting the arachnoid layer, the patient can be exposed to risks of bacterial or viral infections in the brain such as meningitis.

During surgery, ultrasounds are often use to constantly assess the flow of the CSF and the position of the cerebellar tonsils as room is freed up.  The success of the surgery really depends on the patient's severity and how the brain is compressed.  Some patients only need one surgery but approximately 30%, typically those with spinal or cranial deformities and other spinal complications, will need follow-up surgeries because the condition will relapse later in life.

What to do if you suspect Chiari
If you suspect Chiari malformation in your child with WS, it is important to see a neurologist.  The Mayo Clinic has a great web page with information you should bring to your first meeting and a list of questions to ask so you are well informed about the condition.

Sources used in this blog post:
National Institute of Neurological Disorders and Stroke
Chari and Syringomyelia Foundation
The Mayo Clinic

Upright Health: Posterior fossa and Chiari Malformation
Posted by Sarah at 9:43 AM 1 comment: