Although it is a harmless condition and usually requires no treatment or even sought after advice from a specialist, many parents with children who have Williams syndrome remark about their curly fingers and toes.  Most often present in the 5th finger (pinkie) or the 3, 4th or 5th toes, the digit is often seen curving inwards or overlapping with a neighboring finger or toe and the finger itself may look “stubby” or have a triangular or trapezoidal shape to its tip.
Curly Toes (see a great picture of curly toes here )
Curly and overlapping toes are considered highly common in general population and don’t suggest any DNA issues.  They are usually found passed down through family lines.  The most common place to have a curly toe is when the 4th and 5th toes overlap.  Although there hasn’t been a great deal of research as to why this happens, there are some accepted theories as to why this occurs.  Many believe it is either due to the baby’s position in the womb or there is a slight deformity in the joint of the toe.   When the misaligned joint is coupled with either hypotonic or hypertonic muscles of the foot (see the muscles section of this blog), tension is placed on the tendon of the small toes pulling them out of alignment.
A tendon is a strong cord of connective tissue that attaches muscles to bone.  Tendons often act like an ace bandage, creating tension around a joint to stabilize it and allow the muscle to move the bone to create motion in the body.  If the muscle is too weak or too tight it can cause the tension of the tendon to either be too low or too high.  This unbalanced tension then will cause the bone to become misaligned.   This can cause a more extreme overlapping of the toe than what you’d see in your family members.

Usually clinodactyly doesn’t require any medical attention unless it progressively becomes worse turning into a joint contracture or if it interferes with walking.
A hooked finger
While curly toes are not used as a clinical diagnosis of any genetic anomalies, hooked fingers are.  A curved finger is considered typical in 10% of the general population but more likely than not, it indicates a DNA anomaly.  Found most common in individuals with Down Syndrome, a hooked pinkie is a structural abnormality that is present in approximately 60 different syndromes.   A hooked or curled pinkie finger indicates some sort of bone deformity usually attributed to delayed in utero growth (growth in the womb).  It often shows up on ultrasound and can be used to suggest further prenatal testing or guidance of a perinatalist although it is rarely a means of diagnosing any syndrome since it is so common in many genetic issues.  Basically, it can be used as a red flag. 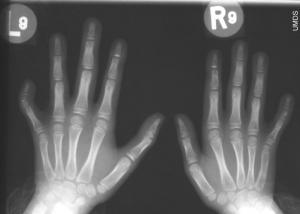 The cause of clinodactyly in the pinky finger is due to a structural issue in the growth plate on the bone, called the epiphyseal plate.  The growth plate is a layer of cartilage at the end of a long bone (like those in the fingers and limbs).  As the child’s body grows, the cartilage is continually replaced with a bone matrix causing the bone to grow in length.  In clinodactyly, the bone’s growth plate is misaligned.  This causes the toe to grow in a curved fashion rather than straight.  In addition to growth in an abnormal direction, the tip of the finger will often end up looking triangular or trapezoid in shape.

Again, unless there is extreme overlap on the finger to the point that it inhibits the child from gripping properly or having proper hand function, no treatment or worry is warranted.

Sources:
http://www.ncbi.nlm.nih.gov/pmc/articles/PMC1255945/
http://www.podiatrynetwork.com/document_disorders.cfm?id=194
http://childrenshospital.org/az/Site1160/mainpageS1160P0.html
Posted by Sarah at 8:58 AM 7 comments: