So how does this happen?

The typical person contains 23 sets of chromosomes.  Each chromosome is made up of tightly wound DNA, which codes for everything in your body.  How your body looks, how it grows, how it works from day to day and even how it acts- are all  determined by genetics.  DNA is really a blueprint or map that your body uses to make proteins.  Proteins are the workers of your body.  You need them to build body structures and to accomplish tasks.  Without them, your body simply doesn't function like it should.  This is why a small deletion of 25 genes out of thousands can make such a huge impact on how a person's body works- like in WS.


Williams syndrome is caused by a totally random genetic mishap.  It is not something that runs in families and the only way it can be passed on to future children is if the person with WS has children, which we'll get to later.  The likelihood that this takes place is around 1 in 12,000.  This number is relative and changes as we better understand and diagnose the disorder.  Something to consider, however, is that everyone has the same chance of this happening.  Even those who have a child with WS have the exact same odds when they have another child.  Again, the only situation where this changes is when a person with WS has children.

There is some research that has suggested that some people have an inverted section of DNA just above the WS region that increases the likelihood that the deletion will occur.  This only makes the odds 1 in 9,000 so it is still very unlikely.  In fact, it's so unlikely that most insurance companies will not pay for parents of children with WS to have genetic testing completed before having future children.

How a deletion occurs

When a mother and father create sperm and eggs (gametes), their bodies manipulate the chromosomes to increase diversity in a process called meiosis.  It all starts with a cell that contains a complete set of 46 chromosomes (23 different types, each with a matching pair).  These chromosomes are duplicated or copied by the cell to make a total of 92 chromosomes.  When they are duplicated something called crossing over occurs.  Crossing over is essentially rearranging a stack of blocks.  One of your chromosomes may have a "green block" where the other has a "yellow" so crossing over basically trades them so the stacks look a little different. 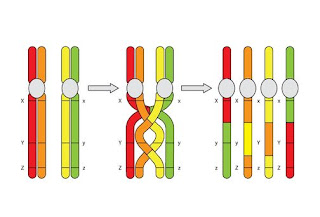 The point of doing this is so that everyone turns out a little different.  It explains why siblings have different looks and personalities.  Genetic diversity is the spice of life.  It is what makes us a successful species.
Crossing over is the step in meiosis where a small deletion could take place.  Sometimes, a group of genes will "stick".  For example, chromosome A made a trade of about 10 genes with chromosome B.  But, when chromosome B made the trade, another 25 genes stuck to the original 10.  So now, chromosome A has 25 extra genes (called a duplication) and chromosome B has 25 less (called a deletion). 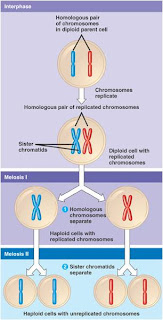 Because of the mishap during crossover, we now have two cells with a typical set of chromosomes, one with 25 extra genes (called a duplication) and one with 25 missing genes  (called a deletion).  During fertilization, if the gamete that has the deletion gets fertilized, you end up with a person with Williams syndrome. 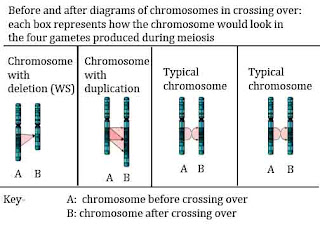 What genes are missing?

This is a big question, partly because it depends on the person.  We call the "classic deletion" to include 25-28 genes, because most individuals with WS are missing this amount.  Some people, however, may have had more genes "stick" during crossover, and others may have had less "stick" so they may be more or less respectfully.  Another reason this is a tricky question is because we're still trying to figure that out.  Researchers have not identified what all these genes do and how their disappearance affects the body, so it's hard to say exactly what is missing. 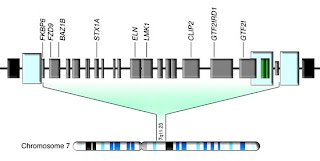 This is what we do know.  The genes are missing from the 7q11.23 portion of the chromosome.  This means that it's on a portion of the long arm of the 7th chromosome.  Here is a list of some of the genes we know are affected:
*This gene information was gathered using the U.S. National Library of Medicine Gene home reference.

How do we diagnose WS?

Before the 1980's, Williams syndrome was only diagnosed by a physician that knew what they were looking for.  This diagnosis was based on facial features, behavior profile and related medical conditions.  In today's age, we know that was probably pretty unlikely that a pediatrician would know about WS, so it was considered a rare condition (the ratio was 1 in 20,000 at the time).  In the 1980's, the field of genetics became more advanced and a better test became available.  It is called fluorescence in-situ hybrid testing or FISH testing for short.

FISH testing uses a probe or marker that is attracted to and binds to a specific sequence of DNA.  A blood sample is taken from the patient and chromosomes are separated so a photograph can be taken.  The chromosome sample is mixed with a fluorescent dye that is designed to stick to the ELN or elastin gene.  Then a picture is taken of the chromosomes under a black light.  This causes the area to glow where the dye sticks.  In a typical person without WS, they would have two areas glowing in the picture since we have two copies of ELN, one on each chromosome.  In a person with WS, they will only have one glowing chromosome, since the other is missing that sequence.  This confirms the diagnosis of WS. 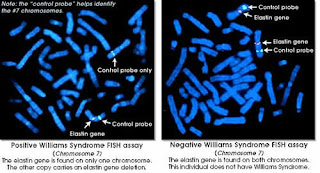 FISH testing has its good and bad points.  Good being it has increased the diagnoses of people with WS because it can give a definitive answer with 99% accuracy.  This is why over the past 30 years, the odds of having WS have increased.  This doesn't mean that WS is more common today than before.  It just means we have a better way of diagnosing the disorder than we once had.  There were a lot of people walking around prior to the 1980's with no clue that they had WS.  The other benefit of FISH testing is that it's very inexpensive so it is generally covered by insurance.  It can be tested with a blood sample, again easy to obtain, and it's quick to provide results.  The family will get results within 2-4 weeks.

The drawbacks to this type of testing is that it doesn't give you any more information other than that you have one or two copies of the ELN gene.  Many parents will be left with unanswered questions as far as how many genes are missing.  Naturally parents are going to wish for this information so they will know what to expect.  Within the past few years a new way of diagnosing genetic abnormalities has emerged called a microarray.  This test will actually map out many genes in a person's genome and tell a geneticist if there is one copy (deletion), two (typical) or three (duplication) copies of each gene.  This is more valuable information because it tests many genes rather than only one.  It is more expensive, however, and most people who qualify for this type of testing are part of research studies for having multiple genetic conditions in addition to WS.  Overtime, however, it's possible that this will become the standard in genetics testing.  As it is used more often, it will most likely become less expensive and more mainstream.

So what does this mean for my child's future?

Individuals with Williams syndrome have greater odds of having a child with WS than the general population.  Although deletions are a random occurrence in nature, there is one situation where it can be passed on genetically- if a person with WS has a child.  Once that deletion is part of your genetic make-up, it will become a part of half the eggs or sperm that the person creates during the same meiosis process explained earlier.  Therefore, half of the eggs, for example, in a woman with WS will have a typical chromosome and half will have the deletion.  So, if a woman with WS has children, the likelihood that their child will have WS is 50%.

Many people wonder about what would happen if a male with WS has a child with a female with WS.  This can be solved using a simple Punnet square. 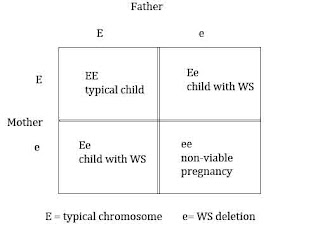 As the field of genetics expands, I'm sure there will be much more to add to this section.  For now, however, parents can rely on genetics to provide them with a diagnosis of WS and then use medical guidelines to monitor their child's growth.  The more they understand about what can affect their child, the better prevention they can provide.  This will catch issues that crop up overtime so their child will get the best medical care possible.