This is the second of my series of blog posts in response to questions presented to me at the 2014 Williams Syndrome Association National Convention.  See Q1 here.

One of the clinical symptoms related to WS is radio-ulnar synostosis or an issue where the radius and ulna are fused in a person's lower arm(s).  A typical forearm is designed in a way to allow the hand to maneuver in a variety of ways in order to manipulate objects in the hand.  When you extend your arm out with the palm facing downward (pronation) and then twist your palm to face upwards (supination), the bones in the lower arm direct that motion. 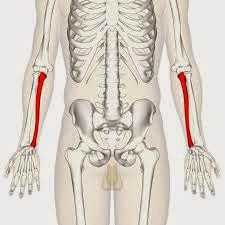 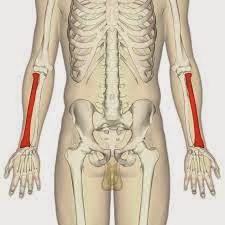 The lower arm is made up of two bones, the ulna and the radius.  The ulna is the bone that makes up the elbow.  Touch your elbow, you are touching a large protrusion on the superior portion of the ulna,  called the trochlea.  The ulna also articulates or creates a joint at the outer most edge of the wrist but in a much less pronounced way.  The second bone of the lower arm is the radius.  The radius articulates or connects to the majority of the bones in the wrist and extends to the elbow where it ends with a small concave circular notch that allows it to turn.  The radius is named for this motion.  Place your hand on your ulna (elbow) and follow that bone down the outside of your arm.  Now twist your palm up and down and notice that bone moves very little.  The other bone, the radius, moves quite a lot!  The radius is on the inside of the arm and it rotates around the ulna.  Watch this short youtube video to see an "insider's" view of how these bones twist the hand.

Now, imagine the radius and ulna bones are connected.  Would you still be able to twist your palm up and down?  No!  This is what happens during radial-ulnar synostosis or the fusion of the radius and ulna.  It affects 26% of individuals with WS.  My daughter has this in her right arm and it restricts the amount of motion and actions she can do with her right hand. 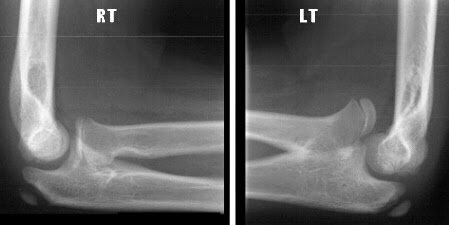 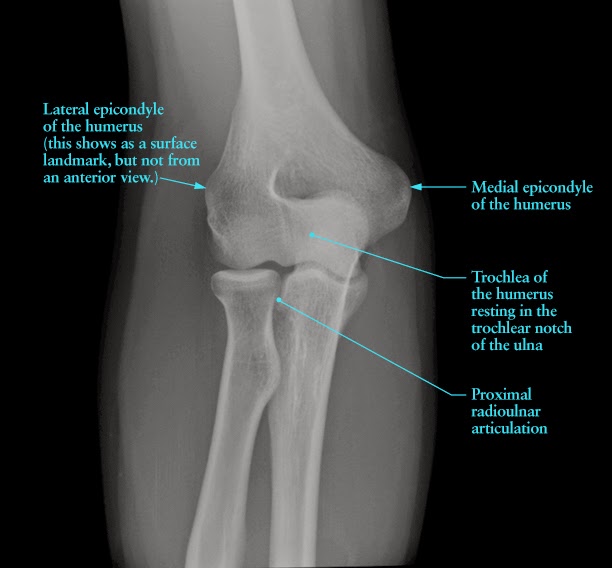 In the photos above, the left is an x-ray view of a typical bone arrangement in the elbow.  This is in supination position (palm rotated upwards).  The photo on the right is one of an individual with radial-ulnar synostosis.  Their radius and ulna are fused at the elbow making it impossible for them to rotate their lower arm.
If your child has radial-ulnar synostosis, there isn't much you can do, medically, to treat it.  Even if the bones were surgically separated, they will not have the same bone structure, vascular supply and ligament/muscle attachment that would allow the bones to rotate properly.  You would be hard pressed to find a surgeon to do this type of treatment unless the fusion very severely limits any use of the arm.

The best way to handle this condition is to modify surroundings and teach the affected individual adaptations they can use to manipulate objects.  You may often find that they have a harder time manipulating small objects and holding writing utensils, such as pencils and crayons.  My daughter shows preference in her left hand for writing but that wasn't always the case.  She often manipulates items with her right and then will switch to the left.  This may be her way of adapting to her environment since she has more movement in the left than her fused right arm.  Many find that being ambidextrous out of necessity is the case for those with radial-ulnar synostosis.  Other actions that may be difficult if they have a  fused arm includes:
This website has some very interesting stories about the challenges and accommodations that come with this condition in the comments section.  The commenters are individuals who have lived with radioulnar synostosis.  *Note, this condition exists outside the world of WS so please don't assume the commentators have Williams syndrome.  Check it out here.

Coupled with the visuospatial issues and motor control that individuals with WS have, the tasks listed above can be even more difficult. You will find that if your child has radioulnar synostosis, they will adapt on their own but there are many ways you can help.  For example, you can chose clothing that doesn't require buttons or replace knobs on doors with handles.  There are also many adaptive technology apps that are available to help your child with academics and self help skills.   This was a major topic of interest at the convention.  To access the WSA's list of useful apps visit the website here.

If you have specific ways you have helped your loved one or students adapt to radioulnar synostosis, I'd love for you to share.  Please feel free to leave your experiences with this in the comments section of the blog or on the WS support group thread!


Source:
Radio- ulnar synostosis and its occurance in WS; 1991 *Note this was published prior to the use of FISH testing for WS diagnosis so information is clinical.

Just one week ago, we completed the Williams Syndrome Association's National convention.  The experience was very different for me in comparison to my first convention in 2010.  At the 2010 convention my daughter was newly diagnosed, I was an overwhelmed and scared parent.  Fast forward to last week and I was in company with the experts, presenting and answering questions.  It was extremely humbling, overall heartwarming and one of the most rewarding experiences of my life.  This blog was just a little idea I had that spawned from learning about WS in my daughter's first year.  I'm eternally grateful to the world of social networking, Internet and supportive organizations like the WSA to literally change my life and others by increasing awareness and education to the parents and community.

During the convention, I spoke about sensory motor pathways and the genetics of WS.  I plan to have a few new posts that share the information I presented at the convention in the near future.  Look for those and others that have been requested (such as urinary and kidney issues in WS and sleep).

I was busy keeping notes of questions that ventured my way throughout the week.  Since many questions we have are on other's minds, I thought I'd answer them in a series of blog posts.  I'll post info as I learn them :)

Q1:  Is the likelihood of a WS parent having a child without WS really 50%?

This question came up during the genetics session.  The reason behind this is that some families are skeptical that there really is a 50% chance of their child with WS eventually having a typical offspring.  We rarely hear of WS adults with children and those we do hear of often have children with WS.  While I don't know of nor have actual records of parents who have Williams syndrome and have typical children, all the literature says that the likelihood is 50%.


This is because of the process of meiosis.  When a person creates eggs or sperm their cells go through a process called meiosis where they duplicate their chromosomes, shuffle the genes during crossing over and then distribute them into two groups and divide.  In the second half of this process, they divide again to create two unique cells.  The result is four unique gametes each containing half of the parent's chromosomes. 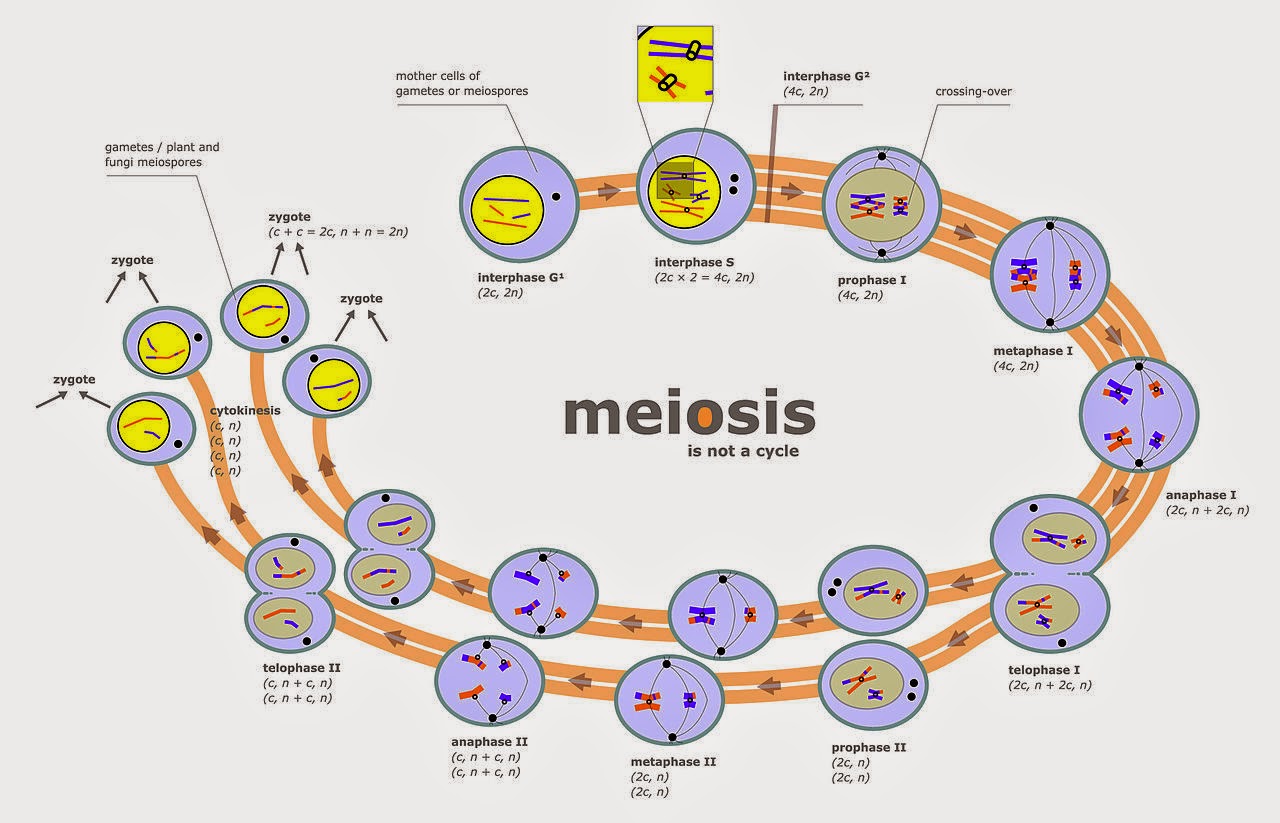 So, if a person with WS divides their chromosomes in half, one half of them will contain the deleted portion and one half would contain the full genetic sequence.  From this point, we call the 50% the probability of inheritance but in reality, it's all chance.  If you flip a coin a couple of times is it likely you'll get heads both times?  Yes!  So it's fair to say that a person with WS could potentially have children who all have WS.  Now consider the full genetic potential of one person.  In her lifetime, one female creates upwards of 6 million eggs before she is born and a male can produce nearly 525 billion sperm!  So if you flip a coin 6 million or 525 billion times guess what the likelihood of getting heads?  50%.  That explains why you might see families with parents who have WS and their children all have WS.  It's the game of statistics.

I'm unaware of studies that are following data on this topic but with the improvement of the WS registry and parents asking for this information I could see this information being available in the future.

Learn more about inheritance and the basics of genetics and WS here.

If you have never experienced a National convention for WS, I highly recommend you try for the Ohio convention in 2016.  I found many outlets for financial support and made the trip affordable for my family.  The wealth of information you gain and the networking you can participate in is worth every cent.  In the meantime, check out www.williams-syndrome.org to find audio recordings of the convention sessions for sale.

Future blog topic requests that came my way during the convention:
Urinary and kidney issues in WS
Improve the gene list and functions
Anxiety, obsessions and meltdowns
Causes of sleep issues in WS
Teaching social skills and friendly conversation

Have any other requests or more info on this blog post?  Leave a comment.  I'd love to have powerful dialog occur on these posts from parents like you.  Stay tuned for more Convention Questions Answered within the next few days!